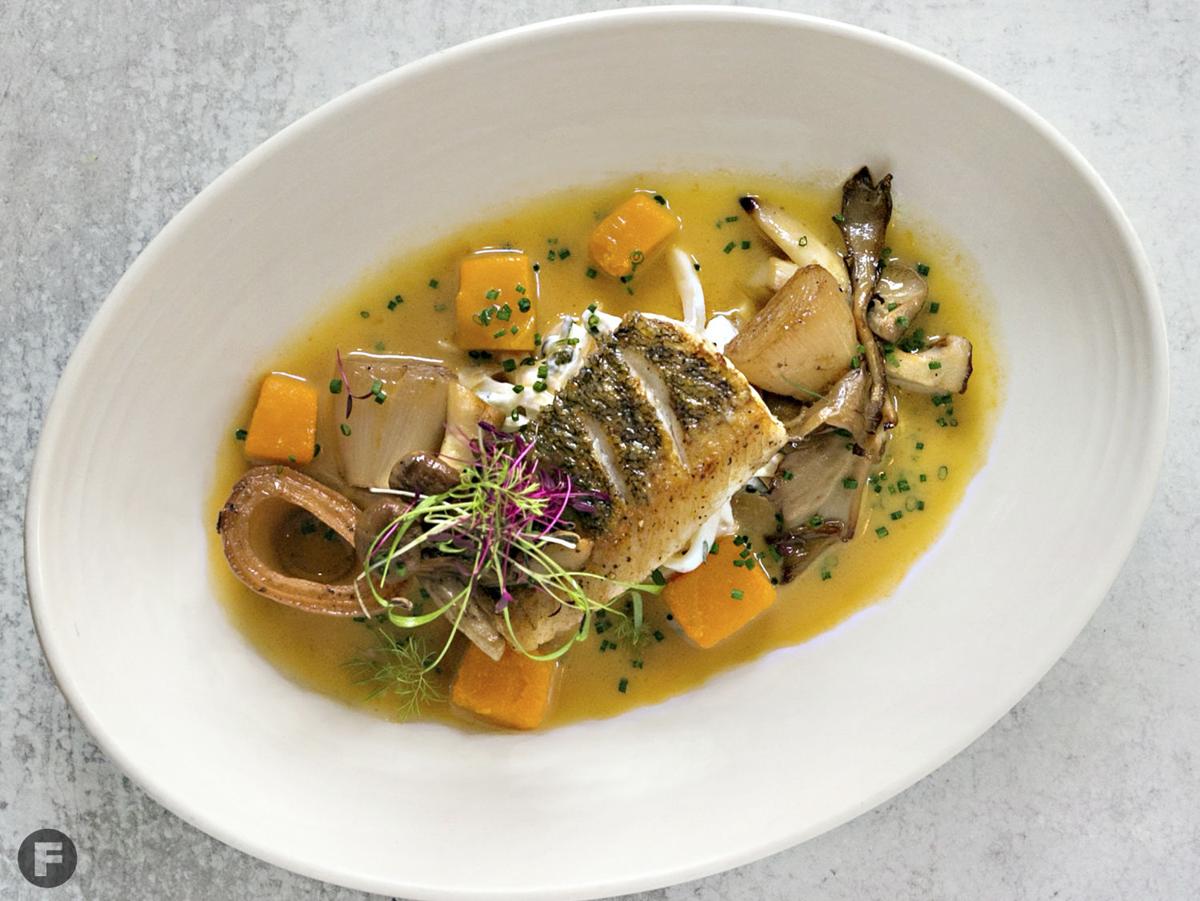 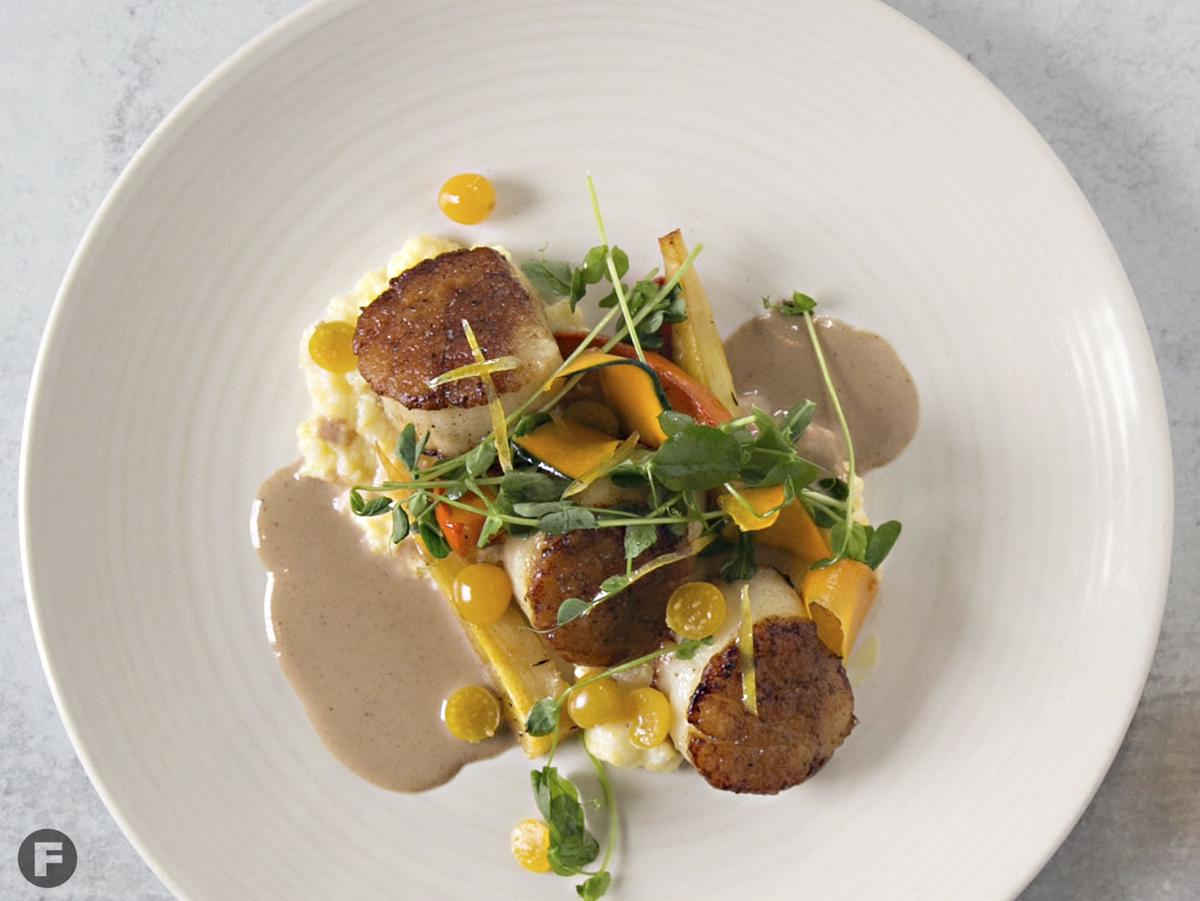 Cherry Street Cellar, formerly The Wine Cellar & Bistro, is halfway through its first year under new ownership. A new menu and new décor have come along with the name change, but owners Daniel and Ali Bauer are anything but new to this restaurant – for them, taking the reins was a homecoming.

Daniel oversees the front of the house while Ali serves as the executive chef at Cherry Street Cellar. They each owe a lot to the restaurant – including their relationship. “We both worked [at The Wine Cellar & Bistro] while we were in college at MU,” Ali says. “We worked there for about a year, and then we started dating, and when we both graduated we decided to move to Chicago.”

The move took the pair on a culinary journey, Ali working her way up the ranks in kitchens like the famed (and now-shuttered) restaurant NAHA, then moving to its sister restaurant Brindille, while Dan refined his front-of-house skills at Tru and other Chicago staples. Ali says the French style of cooking found at NAHA and Brindille has inspired some of the dishes on the menu at the Cherry Street Cellar.

Ali worked as chef de cuisine at Brindille right up until the night she had the couple’s first son. “I went into labor after a busy Saturday night service,” she says. After their second child came along, the Bauers found themselves craving a slower pace – and more space outside of their small two-bedroom Chicago apartment. Columbia, and the restaurant that brought them together, came calling.

“We saw lots of opportunities in Columbia, including a ripe dining scene that continues to grow,” Daniel says. “We also wanted a sense of community,” Ali adds. “And I will say that we have certainly felt that since being back. It’s been a community effort to turn around the Wine Cellar to what we’re doing now. It was a pretty fast turnover considering we didn't just continue on with what the Wine Cellar had been; we kind of wanted to reinvent it and create our own vision. We've had a ton of support and assistance from family and friends and strangers, so that’s been pretty incredible.”

The restaurant has retained many of its beloved aspects, including the happy hour specials and warm, welcoming atmosphere. The Bauers are working on creating a special happy hour menu filled with fun small plates like fried chicken sliders, popcorn, poutine – things that are more casual snack dishes, Dan says.

With these changes, the couple has made their own mark while paying tribute to the eatery’s past. “We wanted to carry on sort of the spirit of the restaurant. We weren’t just going to turn it into a hamburger joint all of a sudden,” Daniel says. “We have changed – sort of – the direction of the menu. It’s more of a land and sea menu. We’re offering oysters all week long now; the Wine Cellar used to get oysters only on Thursday but they were so popular we decided to carry it through the rest of the week and add it to the permanent menu.” Other standouts include the roasted lamb ribs, with flavors of toasted chiles, cucumber and mint, tapioca chicharrones, sweet potato and peanut. For a taste of the sea, try the Arctic Char with poached jumbo lump crab. The menu will also feature specials that rotate with the seasons.

Seasoned guests might notice a change in décor, too. “The space looks a lot different,” Daniel says. “We wanted to open things up, brighten up the space. Being on a lower level, we didn’t want it to feel like you were in a basement.” Along with the name change, the Bauers took away some of the wine-focus from the décor.

“We heard from several people that they never really went to the Wine Cellar because they don’t drink wine. And we didn't want those people to stay away, we wanted to broaden the scope a little bit,” Daniel says. But don’t fret – although it won't be the main focus anymore, Cherry Street Cellar fully intends to maintain the robust wine program that so many customers love. A wider array of cocktails and beers will continue to broaden the scope of the drink menu.

Among all of the changes, the Bauers hope Columbia diners will still feel the restaurant holds a special place in the culinary community, as it does for them. Before meeting Daniel there, as a teenager, Ali had her first fine-dining experience in the space. “When we had this opportunity to come back, it really felt kind of full circle for us, felt very much a part of our own story,” she says. And so in changing the name we wanted to feel like it was our own, but we also wanted the name to pay homage to the previous places the restaurant has been. I think it’s really special that it’s stayed in the community for that long, always in the same spot and always locally owned and operated.”

Pay a visit to Daniel and Ali at Cherry Street Cellar Monday through Saturday to experience the new and old traditions of this Columbia hideaway.