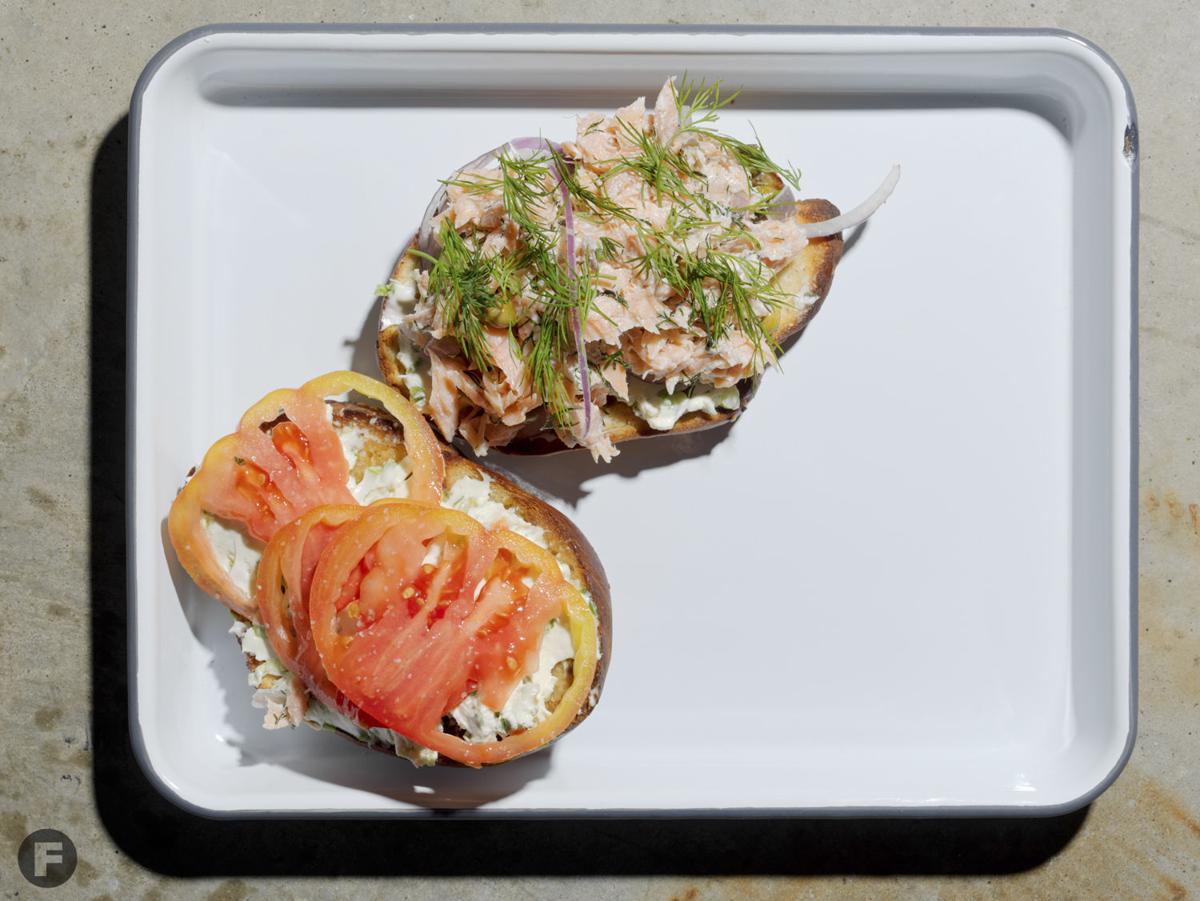 Salmon salad on a Jerusalem bagel with the works. 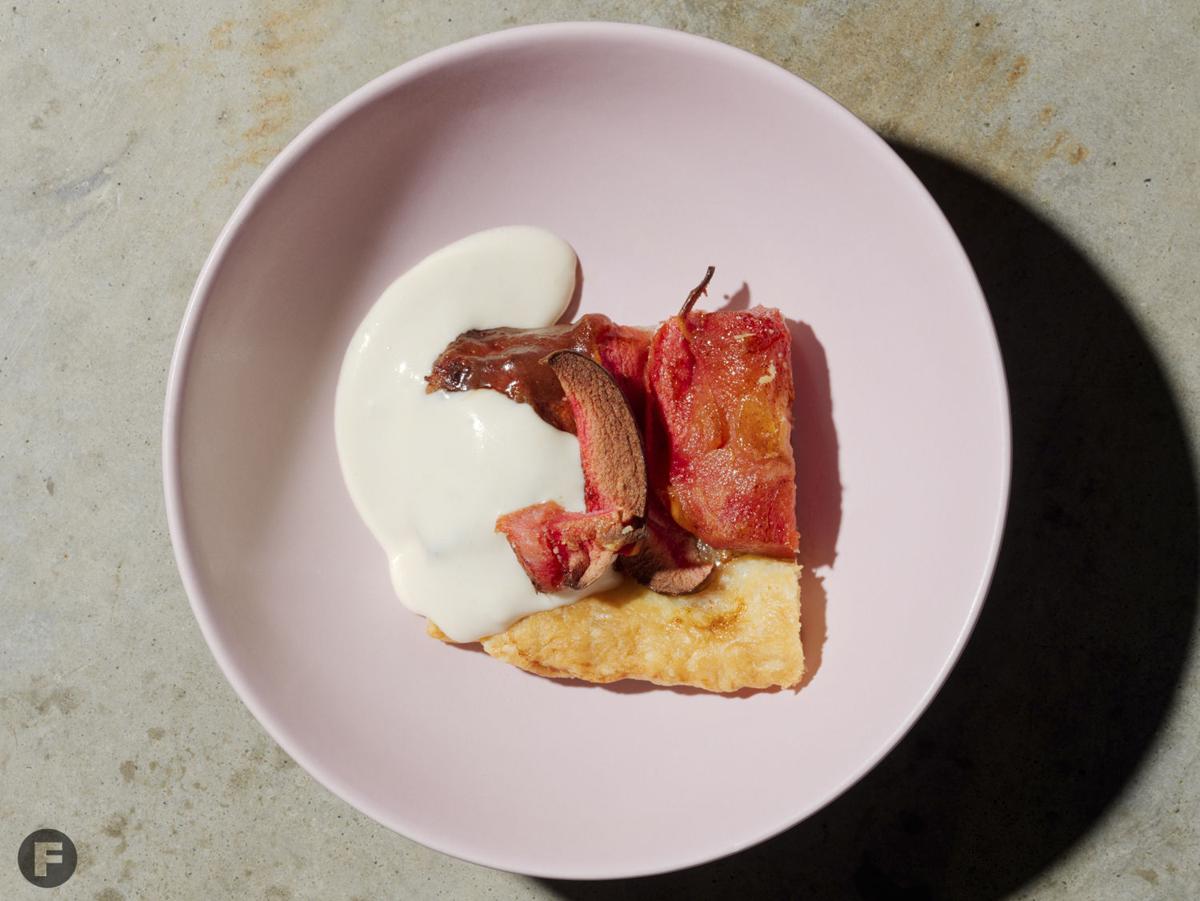 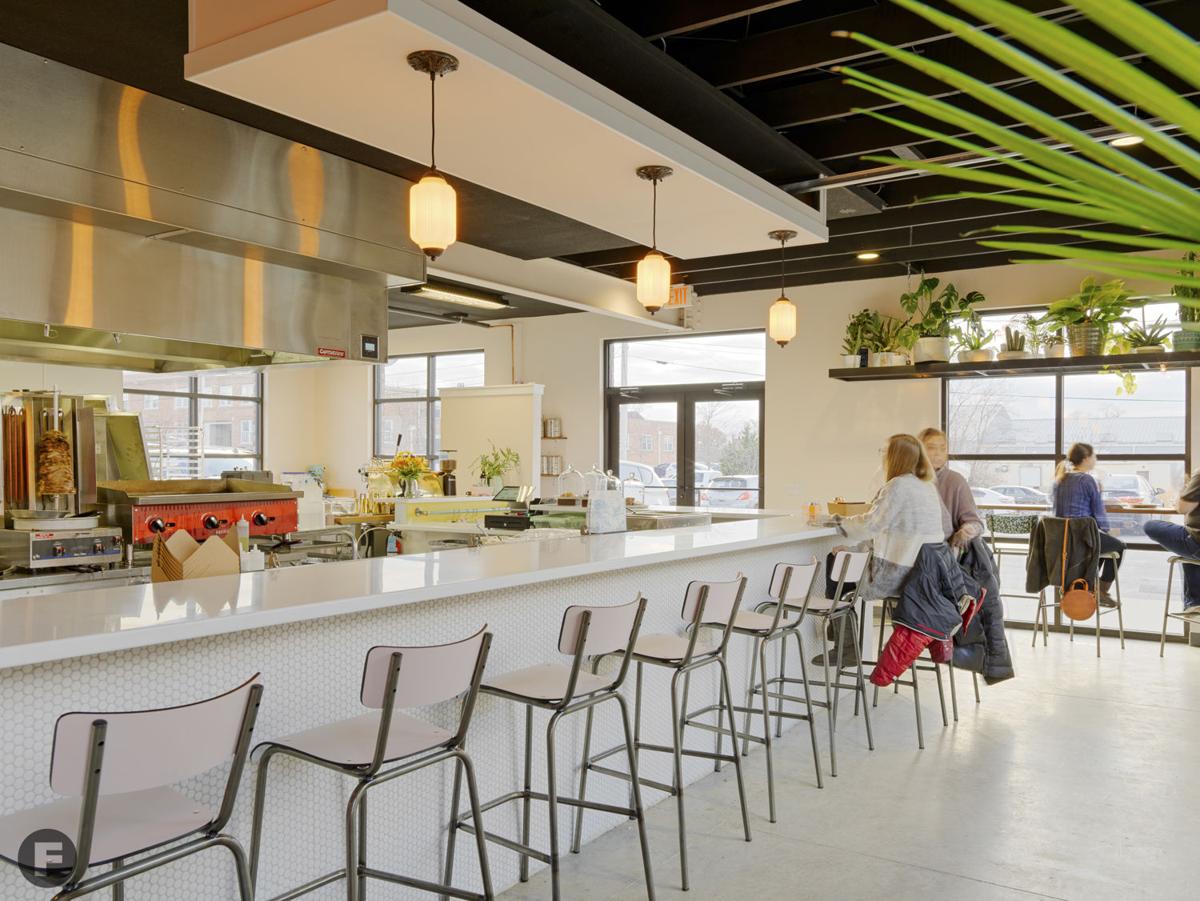 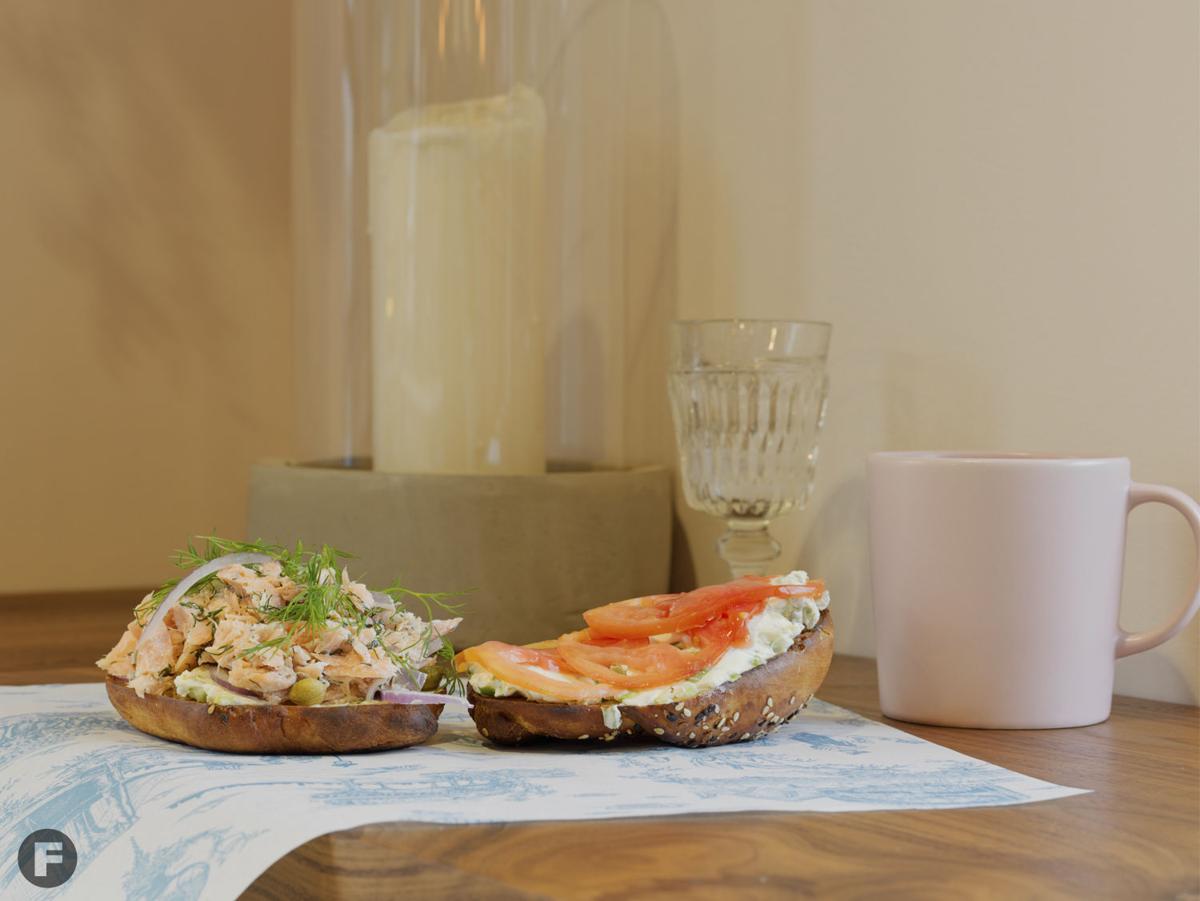 Beet Box is open for brunch on Sundays. 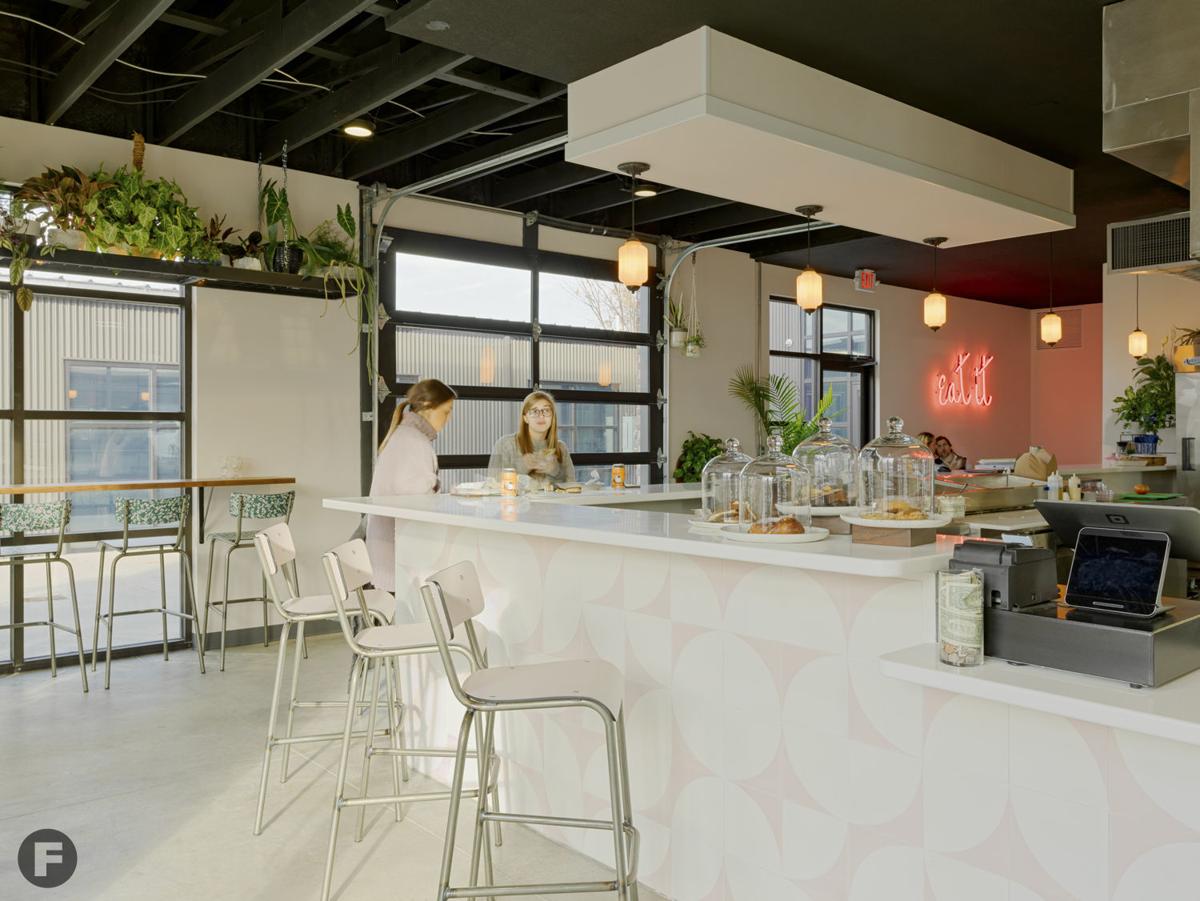 The restaurant operates in a fast-casual setting.

Salmon salad on a Jerusalem bagel with the works.

Beet Box is open for brunch on Sundays.

The restaurant operates in a fast-casual setting.

After much anticipation, Logboat Brewing Co.’s newest neighbor has put out its welcome mat. Beet Box officially opened its doors at 602 Fay Street in Columbia, Missouri, on Nov. 19, offering a menu inspired by the flavors of Middle Eastern cuisine for breakfast, lunch, dinner and, on Sundays, brunch.

The matchbox-sized restaurant seats about 20, and the design – a highlight for chef/owners Ben Hamrah and Amanda Elliott of Peachtree Catering – was curated by the chefs themselves, along with their team. “We’ve been doing this food for a long time, so the execution of it hasn’t been anything really new to us, but being in a space that we designed completely by ourselves has been the coolest thing to see,” Hamrah says.

The 28-seat restaurant, decorated with local artwork and an abundance of greenery, offers a small menu for breakfast, lunch and dinner.

Every detail was taken into consideration, from the custom Russellbilt shelves for the elevated garden of potted plants, to the Missouri walnut countertops and banquette, custom made by Joe Marshall Woodworks. Above the banquette, a glowing pink neon sign bears a simple command – “Eat It.” Even the bathroom design is worth noting, wallpapered with a funky novel print. In 2020, Peachtree Catering will move its operations to the yet unfinished half of Beet Box’s space, allowing the chefs to run both operations under one roof.

The fresh design and atmosphere have captured the attention of diners too, but the food is decidedly the ultimate star. ”Hummus, shawarma, falafel, kebab – those four are our staples that will be available all year round,” Hamrah says. “The only thing that changes is the stuff that goes inside of them, and that rotates based on seasonality and what we’re getting from farmers.”

On top of the daily menu, specials will rotate through, like week one’s lox bagel and mortadella sandwiches. “We did our first special on Saturday and that sold out, so I feel good about the specials being a real highlight for people,” Elliott says. True to Hamrah and Elliott's rhythmic style in the kitchen, the menu will follow the beat of the seasons, and the flavors guests seem to find most appealing. “This week we added a couple things, one being a bodega-style bacon, egg and cheese in the morning because it seems like people are responding more to the savory items in the [morning],” Amanda says.

Each year, we honor the seasoned pros who continue to push the envelope in the local food-and-drink scene, from restaurateurs to artisans to hospitality pros.

You’ll need a drink to accompany this fine fare, but you won’t find many cans at Beet Box – all the nonalcoholic drinks here are made in house, including the vegan tahini shake. “Sodas have been the one thing that we’re really trying to push on people because I think it’s different than what people have expected,” Hamrah says. “The sodas that we make, you know, we don’t have Coke, Pepsi, anything like that; we make it all in-house based on ingredients that we get from the local farmers.”

The za’atar tonic, which Ben compares to a limeade, is a house staple, but others rotate with the seasons along with the food menu. ”Right now we’ve got a wild peach and celery soda, and a rosemary balsamic shrub; those have been a surprising favorite for everybody,” he says. Coffee, sourced from Shortwave, comes in a variety of styles. Try a Chemex brew, a French press, Mexicano, espresso spritz and more. And of course, there’s the booze. As do the other menus, the alcoholic drinks rotate. Pét-nat wines, craft beers (including some from the neighboring Logboat) and housemade cocktails are all in the lineup.

And then, there’s brunch. On Sundays from 10am to 2pm, make your way to Beet Box for a fixed-price, three-course brunch with festive cocktails available to order. This meal is reminiscent of Peachtree’s Sunday Suppers, dinners meant to surprise guests with both the food and location. Sunday brunch will always be offered at Beet Box, but the menu will never repeat. “We post the menu on Saturday night so they can get a good idea of what they’re getting, but it’s just never going to be the same,” Elliott says. The first brunch was a Korean-inspired meal, featuring a trio of kimchi stew, Korean fried chicken and scallion pancakes. Be sure to check Instagram Saturday night to preview the menu for Sunday brunch.

Beet Box is open Tuesday through Saturday from 8am to 8pm and for Sunday brunch from 10am to 2pm.

Deadline Extended! Submit Your Recipes to Extra Helping, a Cookbook to Benefit the Hospitality Industry

Chef Anne Fosterling of The Benevolent King on Easy Risotto, Dal and Making the Most of Frozen Veggies