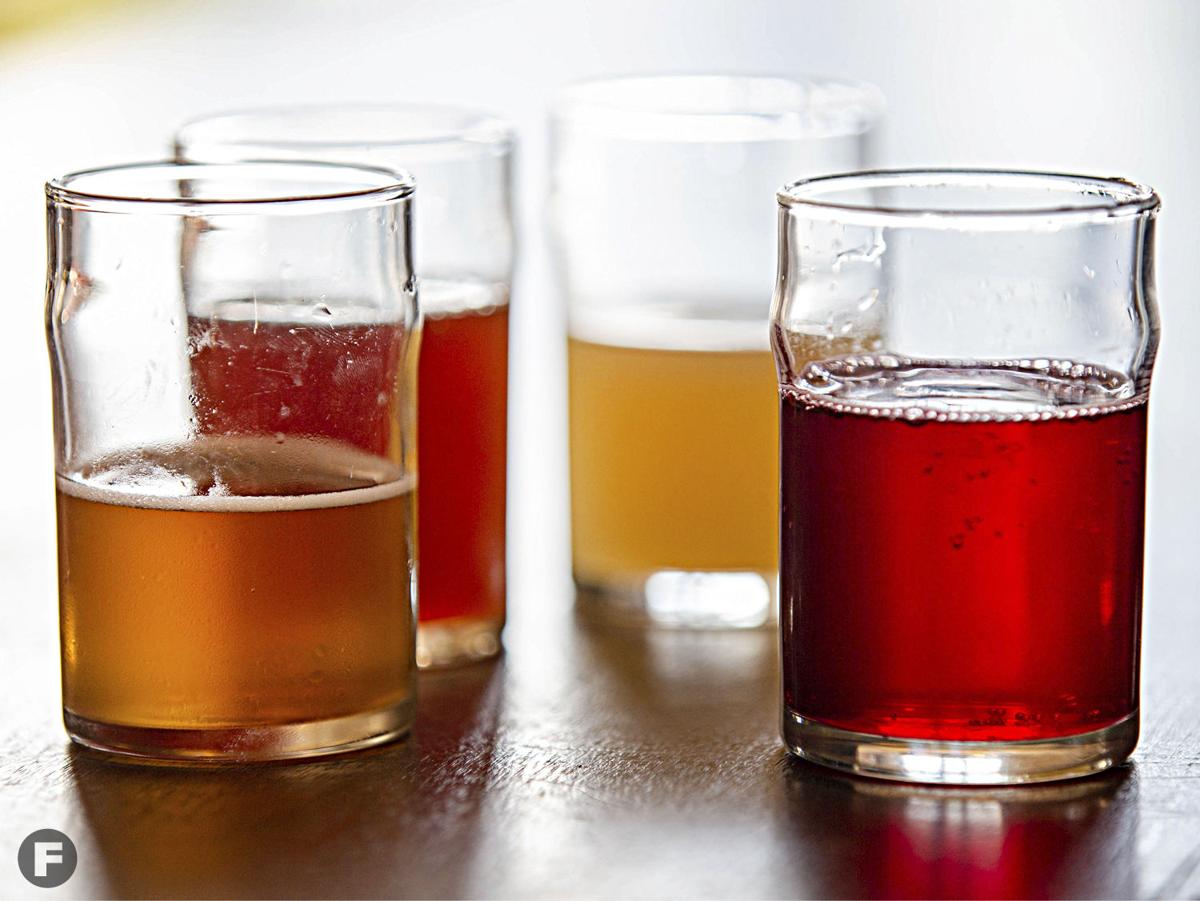 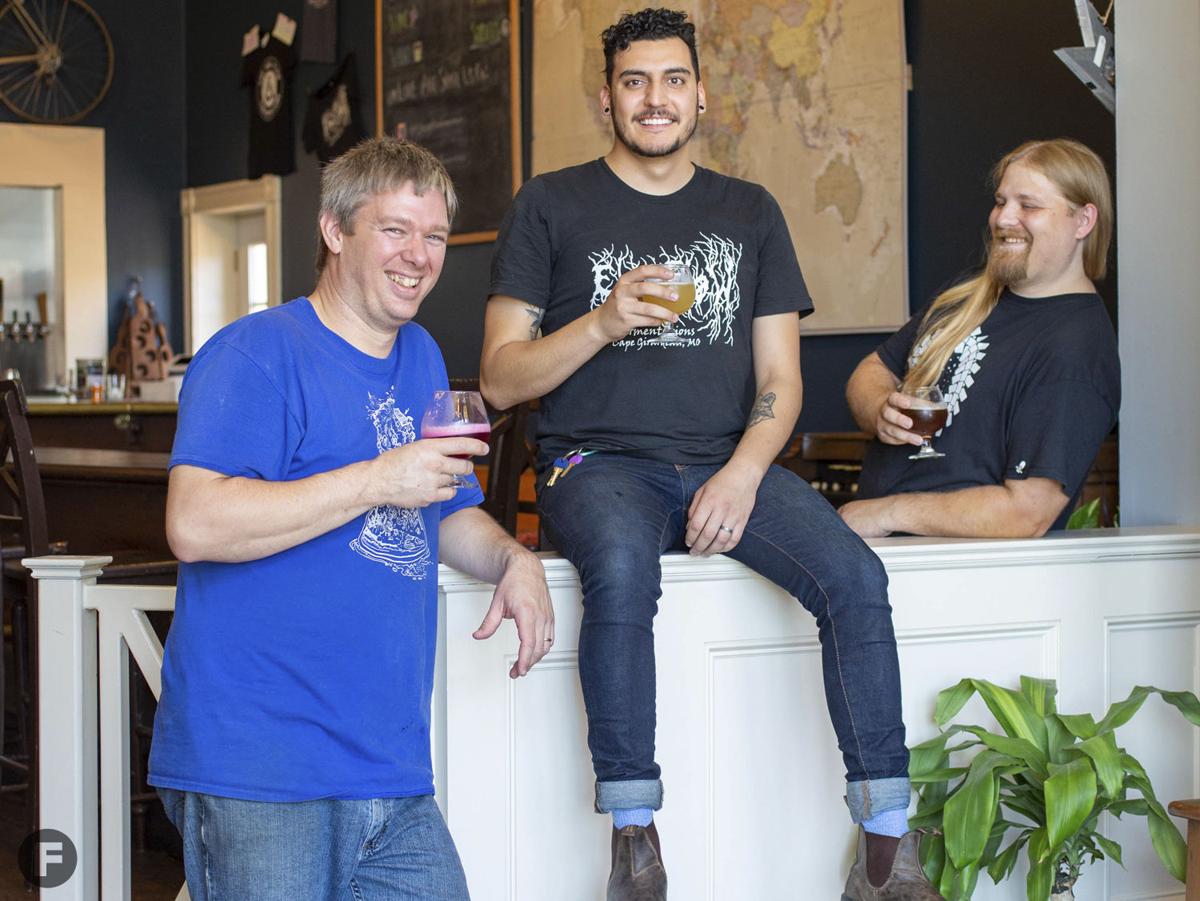 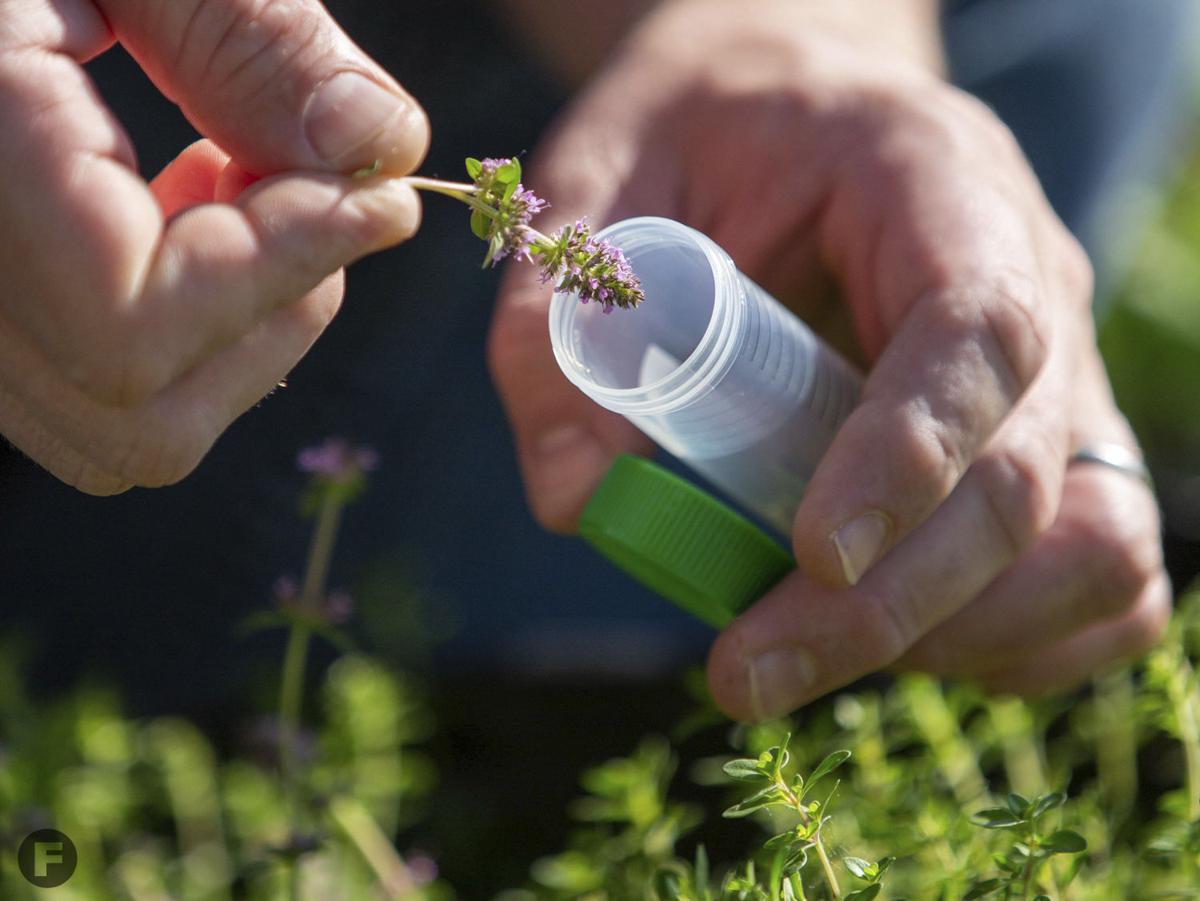 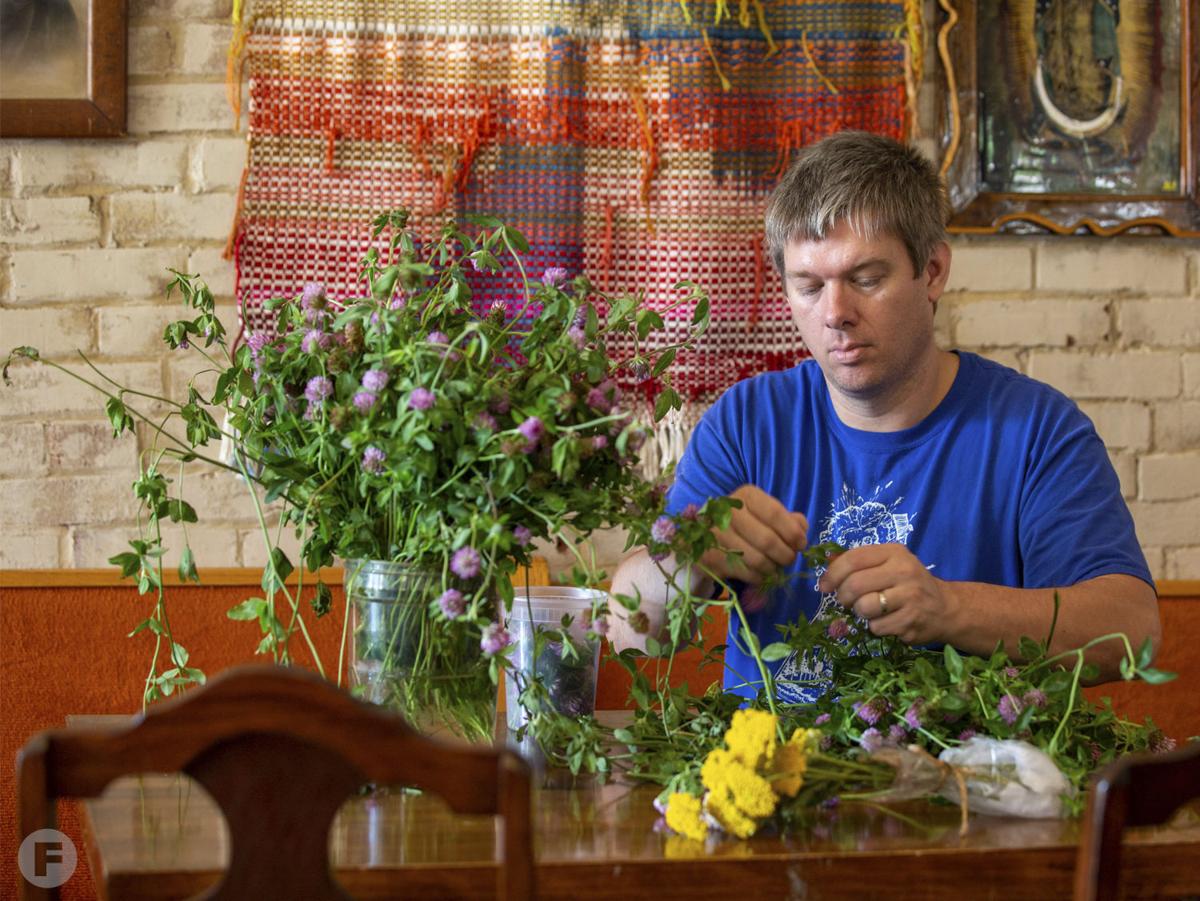 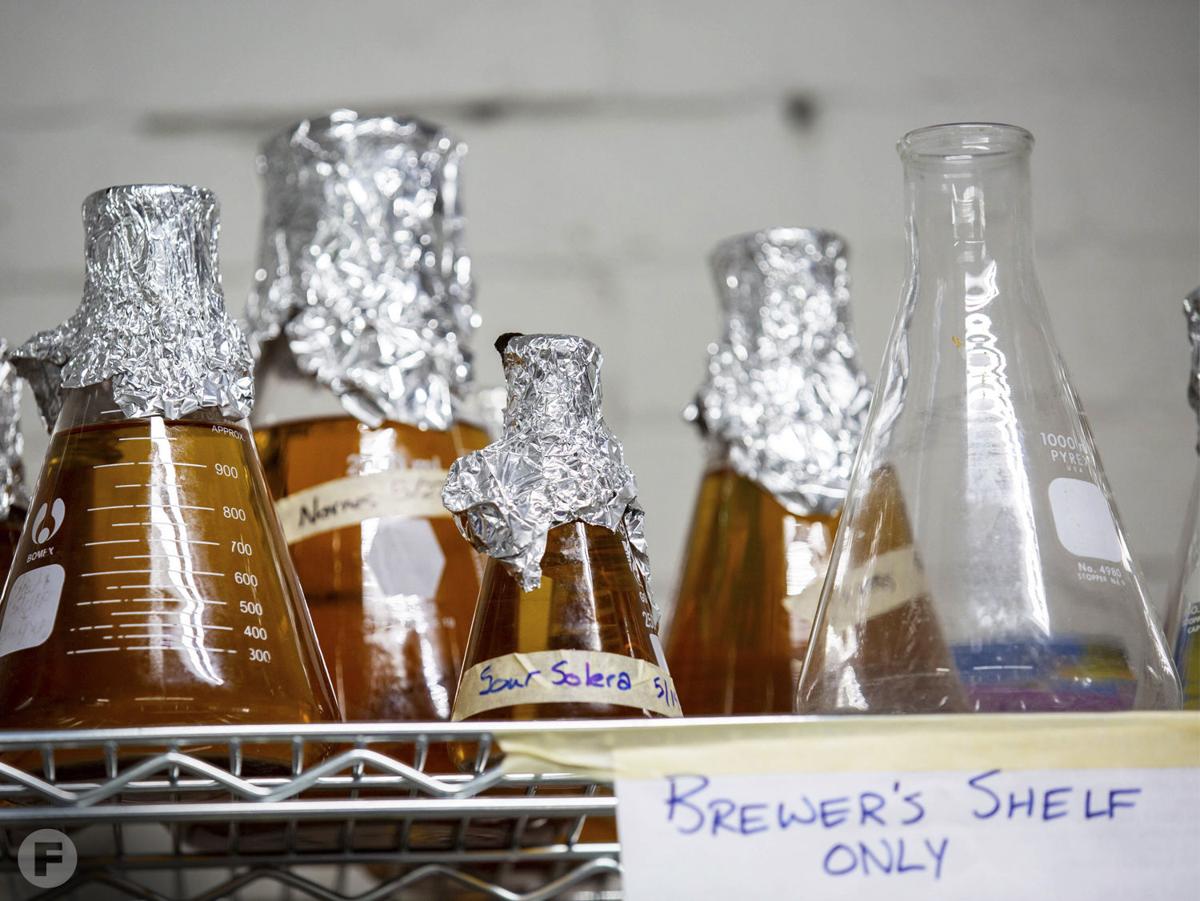 When DeWayne Schaaf thinks about going to the post office, he has to laugh. He feels a little silly – rather than letters to friends, he’s mailing out stacks and stacks of envelopes filled with 15-millimeter centrifuge tubes. Yet these test tubes hold more than run-of-the-mill science experiments. Today, he might be shipping a new wild yeast capture from his backyard down to a lab in Nashville, Tennessee; tomorrow, he’ll send his own Mud King yeast blend to a brewer in Tasmania.

At Ebb and Flow Fermentations, the brewery he launched in Cape Girardeau, Missouri, this year, Schaaf is using wild and historic yeast blends to produce beers unlike anything else in the region. “I kind of wanted the idea of a standard brewery being to the wayside,” he says. “It’s more just about the collection of fermentations. I wanted to break the perception of what it is for a lot of people.”

So when his friends jokingly refer to him as a mad scientist, they’re only half kidding.

A self-taught cook, Schaaf started at Celebrations Restaurant in Cape Girardeau in 1998. He worked as the restaurant’s executive chef for 20 years before purchasing it from owners James and Pat Allen in January 2018. Upon taking over Celebrations, Schaaf – a longtime homebrewer – decided the time was right to fulfill his dream of opening a brewery. He originally opened Ebb and Flow Fermentations, located just a few blocks away from Celebrations, as a craft-beer bar last fall before debuting the brewery’s first house beers this March.

Although he grew up in Ste. Genevieve, where Stag and Milwaukee’s Best were the popular pours, Schaaf says European styles caught his attention in his early 20s. Around the time he moved to Cape, he started homebrewing on a small system his wife gifted him for Christmas, making primarily English- and German-style beers. Soon, that dovetailed into Belgian-inspired beers, and he began exploring mixed-fermentation styles. He joined Milk the Funk, a Facebook group where brewers – both professional and hobbyist – from around the world share knowledge and experiments, primarily related to alternative yeast and bacteria fermentation. Within two to three years, his entire perception of beer changed.

Through the group, Schaaf was introduced to kveik, a family of yeasts that originated in Norway and are known for having a much higher heat tolerance and quicker fermentation time than other brewing yeasts. He began learning as much as he could about the yeasts and experimenting with them, documenting his findings on his blog, Kveik World Order.

You might know saccharomyces as brewer’s yeast or baker’s yeast. Latin for “sugar fungus,” this genus of yeast metabolizes sugars to produce carbon dioxide and alcohol, essential to creating both beer and leavened bread.

Commonly known as “Brett,” brettanomyces is a genus of wild yeast that is often considered a contaminant in beer and wine, but is used in traditional farmhouse styles like Belgian lambics, saisons and Flanders red ales to impart flavors from floral, earthy and fruity to barnyard and “horse blanket.” Over the past few years, craft brewers – especially those aging in oak barrels – have embraced Brett, which works slowly, to add complexity to a range of styles.

Also used to ferment yogurt, kimchi and sauerkraut, lactobacillus is a type of bacteria that eats up the sugar in wort and produces lactic acid, which lowers the pH and creates a clean, sour taste. Lactobacillus works quickly, and adds the characteristic tangy, sour flavor to styles like German Berliner weisses and Goses.

Like lacto, pediococcus is a lactic acid-producing bacteria, but also creates other funky and sour flavors. It’s often combined with Brett and found in traditional styles like lambic and gueuze.

Somewhat of the new kid on the block, kveik is a centuries-old Norwegian yeast that only recently began making a comeback in the brewing world. Brewers love it for its high heat tolerance (it can produce similar flavor profiles at wildly different temperatures), quicker fermentation time and low pitching rate, which means you can use a smaller amount of the yeast to inoculate the cooled wort.

“[Kveik] has probably been the hottest topic in mixed fermentation in these groups to the point where a lot of the old-school guys are grumpy about it,” Schaaf says with a laugh. “It’s not Brett or lactobacillus; lately it’s been kveik. I think it’s really getting ready to take off in the brewing world just because of the temp control.”

In addition to collecting traditional kveik yeast strains, Schaaf also began producing his own wild yeast blends. Based on some knowledge gleaned from YouTube videos, he built a small home lab with a dozen or so centrifuge tubes, a few pour plates and a burner. To build a new blend, for instance, he’d start by capturing some wild yeast off of a dandelion on the edge of his driveway or a bottle of Spanish natural wine. He’d then transfer the wild capture into a few 50-milliliter tubes filled with wort (the sugary liquid that ferments into beer), close the tube and shake it. Every five to seven hours, he’d give the tube a light rustle to check for signs of activity, like CO2 bubbles or a turbid or hazy character to the liquid. Over about 30 days, Schaaf would continue to build up the starter culture, checking for signs of fermentation and assessing the aromatics before plating the new yeast strains out to be used for brewing.

It wasn’t long before Schaaf began swapping yeast – in all, more than 40 different yeasts including all of his wild captures and kveik cultures – with brewers around the world through connections made on Milk the Funk and Kveik World Order. He’d only charge for shipping; rather than trying to turn a profit, his goal was to share these unique yeast strains with other brewers. His Mud King blend, for instance, became popular with other brewers through a wild capture swap in the Milk the Funk group. It combines those dandelion and Spanish natural wine yeasts with wild captures from friends, including a dandelion in Colorado, an oak tree in Wisconsin and a Meyer lemon in California. Currently, Mud King is used in 45 different countries, including Mexico, Japan, Thailand and Tasmania, and at 37 commercial breweries globally. Ebb and Flow, of course, uses the Mud King blend, in addition to wild captures and historical yeast strains like kveik, which make up around 85 percent of its beers. Schaaf oversees production of these beers with the help of head brewer Brandon Simmons and brewer Jaime Zarate Sada, who also assists Schaaf with yeast propagation and quality control.

In a rare move for a commercial brewery – and a startup one, at that – Ebb and Flow avoids using commercial yeast entirely. The process is risky, of course, as wild yeast can work in unpredictable ways, but for Schaaf, the benefits outweigh any challenges. In addition to creating alcohol by eating the sugar in wort, different yeast strains also produce different flavors in beer.

“So many breweries in the world use yeast you can order from [a] lab,” Schaaf says. “[Ebb and Flow’s] yeasts are a different profile, so the beers will taste different. Even if I brew the exact same wort, I’m hoping it’s something that’s slightly different than anybody else’s because of all the bugs, all the yeast and everything is different.”

“Every single beer is an experiment when you don’t know what the yeast that you’re working with is capable of,” Simmons adds. “But that’s also kind of the fun of it, too; sometimes we strike gold with something and we’re really happy with it. It’s more of a benefit than anything just because it’s so unique; we don’t have a house culture or blend – we have hundreds.”

That’s why it’s Ebb and Flow Fermentations, not Ebb and Flow Brewing Co. – Schaaf wanted to drive home the fact that fermentation is the heart of the brewery. To that end, Ebb and Flow’s unique yeast-driven beers are made either with historical strains traded from around the world or wild captures found around Cape and other locales. The brewery then works with Bootleg Biology, an open-source yeast project in Nashville, to isolate and bank those wild captures.

If Schaaf’s goal was to set Ebb and Flow apart from other breweries, he’s certainly succeeded, and you need only look at the week’s taplist to understand how. Ebb and Flow doesn’t have any flagship beers, but the lineup always features beers brewed in a few core styles: culinary, historic and modern. To that end, you might find a rosemary, saffron and lime blonde alongside a lingonberry kvass and a chai New England IPA. With Schaaf’s decades of experience in the restaurant industry, culinary inspirations play heavily into the beers, featuring combinations of ingredients that he knows work well together, like blackberry and lavender; prickly pear and jasmine blossom; or cranberry, apple and baharat (a Middle Eastern spice blend). Inspired by Zarate Sada’s childhood in Mexico, a recent offering played on the popular drink tepache with pineapple, jalapeño and cinnamon.

Ebb and Flow also offers historic styles, like keptinis, a little-known variety of Lithuanian beer, or a recreation of the Double Brown Ale that Whitbread Brewery made in England in 1955. The latter, simply dubbed Historic Brown, was fermented with kveik and housemade invert sugar (made from sugar that’s cooked down for hours) as opposed to the more widely used crystal malt. “Historically, they didn’t have all those specialty malts, so we use the invert sugar to give it that caramelly, toasty flavor,” Zarate Sada says. “Whenever we do traditional stuff, we go hyper traditional.”

The brewery also serves a small, seasonally inspired food menu with options like chicken liver pâté, a shaved steak gyro with pistachio dukkah and a lamb flatbread. Up until now, Ebb and Flow’s beers have only been available on tap at the tasting room in Cape Girardeau, but the brewery recently started offering growler fills and will release its first bottled beers in July or August.

Although there’s always one guest tap with a lager to please less adventurous palates, Schaaf says guests have wholly embraced Ebb and Flow’s unconventional approach. In just the first few months of releasing its house beers, Ebb and Flow has welcomed visitors from around the state, and even as far away as Arkansas and Alabama. The ever-changing, esoteric beer list is refreshing for guests, and perhaps even more so, for the brewers.

“No matter how long you’ve been doing this, you’re constantly learning something,” Simmons says. “There’s constantly something that hasn’t been done. We haven’t hit our ceiling yet as far as what we’re willing to experiment with and that kind of freedom has really humbled me – I didn’t know we could make things like this. I’m excited about what we’ll be making tomorrow.”

It’s naturally made, low-ABV – typically between 4 and 9 percent – and sustainable.